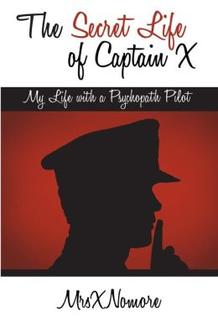 What the experts are saying...

"Once I sat down and began reading this book, I could not stop. I read The Secret Life of Captain X: My Life With A Psychopath Pilot, in one sitting. This book was one of the few memoirs that truly triggered my own emotions like none other. As I read, I repeatedly asked myself if it was possible that MrsXNomore and I had been married to the same man. On several occasions, I did the math in my mind, wondering if our ages were similar enough for it to be possible. Then, I realized that whether butcher, baker, or candlestick maker (or airline pilot) they really all do tend to operate from the same playbook."

"MrsXNomore’s memoir spells out the progression of events in a relationship with a psychopath perfectly. Readers who have lived through this experience will immediately recognize the events from start to finish, beginning with the love bombing phase and ending with the signature discard. The pervasive patterns of whirlwind affection, the relationship that progresses at full-throttle, and subsequent lies, broken promises, abuse, denial, blaming and manipulation; each common factors in relationships with psychopaths. Whether you have had the misfortune of dating or being married to a “Captain X” or not, this is a must read for those wishing to understand the behaviors which accompany psychopathy." - Linda Hartoonian, Aftermath: Surviving Psychopathy Foundation

"A profound memoir by a former pilot's wife telling of her marriage to a man who took her on a first class, one-way ticket to Hell, and from which she had to make her own journey back to the person she once was. What she discovered along the way was to change her forever. This is a must-read for all who live their lives walking on eggshells, trapped inside what might be, a not so grand illusion. An illusion created by a psychopath." - Thomas Sheridan, Puzzling People: The Labyrinth of the Psychopath

"For anyone who has had the misfortune of being in relationship with a psychopath, MrsXNomore narrates eloquently and emotionally her journey, including the classic red flags she did not notice until she had been well and truly shafted both emotionally and financially: namely, the lack of empathy, parental alienation, and most importantly projecting their insanity onto their victims. Highly recommended for anyone who wants to understand what the hell went on in their relationship with a self-obsessed personality-disordered sex addict."​ - Sarah Strudwick, Dark Souls: Healing and Recovering From Toxic Relationships

"A courageous story of deception and survival shared to help others understand and overcome a traumatic encounter with a psychopath." - Barbara Bentley, A Dance with the Devil: A True Story of Marriage to a Psychopath

A brave and compelling memoir written to raise psychopath awareness!